Zagora or Merzouga desert? Which path should we take? 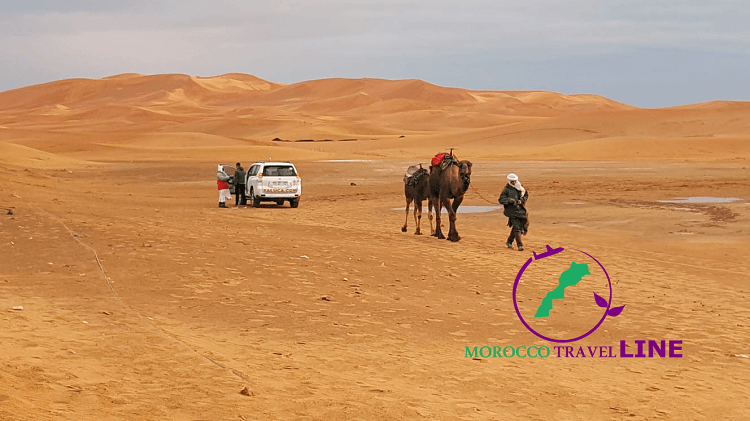 Which desert, Zagora or Merzouga, do you think is more beautiful?

The topic of whether destination is preferable, Zagora or Merzouga desert, is one that we are asked very often. Therefore, in this post, we will do our best to assist you in selecting the ideal location for your next vacation to the desert.
More than ten nations in North Africa have a portion of their landmass occupied by the Sahara Desert, which is found in the northern region of the African continent. When traveling to the Sahara Desert, Morocco is one of the most convenient and secure nations to go through. People often have the mistaken impression that the desert is full of countless sand dunes, however this is not the reality. The vast majority of the desert is composed of rocks and arid ground, yet the stunning sand dunes are not always in every location.

There are a number of locations in Morocco where you may see the sand dunes, with Merzouga being the most well-known and convenient of these locations. You may also go to the province of Zagora, which is farther off from tourist highways and has a tiny town and hamlet called Mhamid El Ghizlane. From there, you can drive to Sahara regions that haven’t been developed as much as other parts of the desert.

It is highly unlikely that the Sahara will be the only destination on your trip to Morocco; therefore, it is more practical to visit the desert in Zagora (for a minimum of one night) as part of a trip lasting no longer than three days; however, if you have more than three days, you can spend 1-2-3 nights in the Merzouga desert instead.

The desert should be visited in the spring or the autumn for the greatest experience. During the summer months, the temperature may reach quite high levels, while during the winter months, it is possible for it to be chilly even during the day.

In Morocco, the town of Merzouga desert is the most convenient location from which to see the sand dunes of the Sahara Desert. On the other hand, getting here will need you to spend a significant amount of time traveling around the surrounding region. Both Merzouga de and Zagora are located a significant distance from the main towns of Morocco; Marrakech is 560 kilometers away, while Fes is 460 kilometers away.

Erg Chebbi is home to some of the world’s tallest sand dunes, with the tallest reaching heights of around 150 meters.

There are four primary routes that may be used to reach Merzouga Desert and the Erg Chebbi Dunes:

In Morocco, there are many distinct characteristics and norms that one must adhere to. To begin, there are plenty of law enforcement personnel on the roadways who are eager to conduct inspections. Therefore, make an effort not to go above the legal speed limit, always wear a seat belt, and under no circumstances should you ever disclose that you are fluent in a foreign language, particularly French. If you do not speak French as your first language, the police will not want to spend their time on you under these circumstances. To a large extent, the roads are in decent condition; the only areas with considerable traffic are the major cities. If the above events do not frighten you, then you should investigate how much it will cost you to hire a vehicle in Morocco.

Where are the best places to stay in Merzouga?

If you do not remain in Merzouga for at least one night, you will not be permitted to go to the desert there. Due to the fact that hotels and riads are dispersed across the town of Merzouga and the fact that the village of Merzouga spreads for a great distance along the highway and the dunes of Erg-Chebbi, it is best to make your decision on where to stay well in advance.
If you are planning to go to Merzouga Desert and are seeking for the best spot to arrange an overnight stay in a desert camp that also includes a camel ride, you may want to look at the information provided on our page about camel trekking in Morocco.

Taking in views of the desert in Merzouga may be done in a number of ways, some of which cost money and others of which are completely free; the closest dunes are easily accessible on foot thanks to their proximity to the hamlet. The most important thing is to position oneself in close proximity to the point of interest. Read on for more details on the activities available in Merzouga!
If you get here by automobile, you should not expect to be able to drive on the desert floor; this is something that can only be done off-road and ideally with a guide. On the other hand, driving a vehicle will enable you to go closer to the fascinating dunes, which are dispersed over a broad area.

A 4×4 excursion across the sand dunes and desert landscape of Merzouga Desert.
Camel ride. You have the option of driving out to the dunes to watch the sunset or driving out to the tent camp in the middle of the desert and staying there for the night.
Sandboarding at Merzouga desert. There are a lot of hotels and campgrounds that provide dayboard rentals.

Erg Chigaga and Erg Lehoudi Dunes are located in the Sahara Desert in the province of Zagora.

When compared to Merzouga, the Sahara Desert in the province of Zagora receives a much lower number of tourist visitors. There is a lack of built infrastructure there, but on the other side, the desert landscapes have been less altered by the presence of humans. The region around the town of M’Hamid El Ghizlane is home to some of the largest dunes in all of Zagora. The actual settlement may be found 460 kilometers away from Marrakech and 760 kilometers away from Fes. There are two areas nearby that are known for their stunning dunes and sand, both of which are close by.
-The Erg Lehoudi dunes are around 8 kilometers distant from the settlement of M’Hamid and may be found in the nearby neighborhood.
-The Erg Chigaga dunes may be reached by traveling about 50 kilometers into the desert from the M’Hamid hamlet. This part of the Sahara is where you will find the fewest people and the most fascinating terrain.

How can one go to the dunes of Erg-Chigaga, which are located near the settlement of M’Hamid El Ghizlane?

In the province of Zagora, the following are the four least expensive methods to go to the Sahara Desert:

Where should one stay when visiting the M’Hamid El Ghizlane area?

It is recommended that you spend the night on the dunes of Erg Lehoudi, which are located near to the settlement of M’Hamid, if you arrive at M’Hamid in the afternoon while it is still light outside. In the morning of the next day, continue your journey to the dunes of Erg Chigaga, which are located around 50 kilometers from M’Hamid.
There are various motels in the hamlet where you may remain the night if you are unable to make it to M’Hamid during the daytime hours. Do not be concerned about this possibility. Some of them are as follows: Dar M’hamid, Riad Activity Arg, and Auberge Kasbah are the names of the hotels. Dar Sahara Tours, Dar Yaya. Your hosts would be happy to assist you in developing an itinerary for the rest of your time in the desert.
Bivouac L’Erg, Nomade moon camp, and Majorelle Desert Camp are some of the campsites you may visit in the dunes of Erg Lehoudi as soon as you arrive in M’Hamid, provided that you have enough time to get there before the sun sets.
Atta Desert Camp, Nubia Luxury Camp Erg, Chegaga Desert Excursions, Camp Atlantic Chigaga, Chegaga Berber Camps, and Luxury Camp By DAR AZAWAD are some of the campgrounds and tents that can be found in the dunes of Erg Chigaga.

How should one go about planning a journey to the desert from M’Hamid El Ghizlane?

There are other ways to plan a journey across the dunes, even if you choose not to take part in an organized tour to the Sahara from Marrakech or Fes and instead go alone to the settlement of M’Hamid in the Sahara.
Make reservations at the campgrounds in Erg Lehoudi and Erg Chigaga, and discuss transfer logistics with the people who own the tents. You will be staying at the campgrounds, which provide full board, and exploring the surrounding region on your own time.
Desert treks lasting many days are quite popular activities in M’Hamid. You will be able to trek from M’Hamid to Erg Lehoudi and then on to Erg Chigaga while being escorted by guides and some camels if you sign up for a program at your hotel or through a local tourist agency. You will be provided with the necessary equipment, food, and local guides, and you will travel across the desert on foot and on camelback for many days. About 60 kilometers may be traveled in one direction. The trip return may be completed in an off-road four-by-four vehicle.
You may place an order for a private tour of the dunes Erg Lehoudi and Erg Chigaga at a travel agency in the area. The trip will last for a few days. The cost of the trip for two persons to participate in for all three days is around 300 euros. Included in the price are transportation and full board.

How Does Camping in the Desert Work?

In both the Merzouga and the Zagora deserts, a desert camp is made up of numerous tents that can each accommodate two people and have wooden doors that latch. They are shielded from the wind by the dunes that are situated between the lowlands where they stand. Clay is often used to construct the walls of the tents, with a tent serving solely as the cover for the roof. In most cases, the only things that can be found inside the tent are beds, mattresses, bedding, and heavy blankets. Even in the middle of summer, the temperature drops significantly at night in the desert. If you get shivers easily, investing in thermal underwear and a sleeping bag of your very own is not going to be a waste of money. A space for holding outdoor parties and a bonfire may be found in the area between the tents.

In addition to that, there is a large tent that has an eating space. The water in the showers and toilets at the campgrounds is heated by the sun, and the structures housing them are made of clay and are permanent. They turn on the generator in the evening for a few hours so that you may charge your equipment using it. You can charge it from the generator. Following dinner, the staff gathers around the campfire for an informal concert featuring live music and traditional songs.