First day of Fes tour : In the morning around 8 am you’ll start travelling southeast via Ifran nicknamed Switzerland of Morocco or the cleanest city of Morocco, towards Sahara Desert Stopping at the famous and the largest cedar forest in Morocco where you will see the Barbarian apes, your journey continues along Midalt the Capital of apples then luxuriant Ziz gorges landscapes stopping in the panoramic views along the way. Thereafter driving through the welcoming Berber villages of Ziz valley. Getting to Erfoud the land of fossils After relaxing few minutes in Merzouga which is your destination where the famous Erg Chebbi sand dunes existed, you camels will be waiting for you to take you on an adventure in the sand dunes enjoying a wonderful sunset. You will spend the night in an equipped Berber camp with drums music in the heart of the gold Sahara desert.

Your second day of FEs tour will start by waking up early to see the spectacle of sunrise, when the color of the dunes combines with the play of shadows to make an awesome view. Then ride a Camels back to meet your guide/driver and start your day with him by Rissani where it existed one of the main traditional markets, that was in the past a station for trade’s caravans .in addition that town was the foundation of the Alaouite dynasty – the current ruling royal family- in Morocco. The road passes through Erfoud the land of fossils and that would be an opportunity to see one of the many fossils mining (if you are interested).Continuing the way via Berber villages of Tinjdad to reach Todgha gorges a series of limestone river canyons, This stunning area affords an opportunities to walk and enjoy deep cliff-sided canyons. The night will be in Bomaln Dades in nice hotel.

The third day will start from Bomaln Dades driving through the villages of this charming area,. Passing roses fields of Kelaa Magona known as Valley of the Roses famous for its Rose Festival in May, and via the road of a thousand Kasbahs toward Skoura oasis, then heading towards Ouarzazate known as Hollywood of Morocco, where you will stop to see the world’s largest movies studios Then the Ait Ben Haddou Kasbah which is the largest Kasbah in Morocco and also has been a UNESCO World Heritage Site since 1987 and several films have been shot there. From there start crossing the high Atlas mountains through pass named Tizi n’Tichka ,that reached an altitude of 2260m where you will stop to appreciate the mountain view befor arriving to Marrakech in the late afternoon. end of 3 days fes tour to marrakech 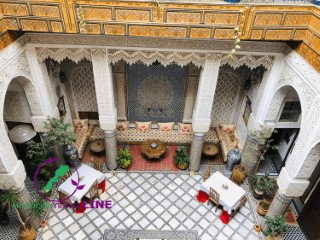 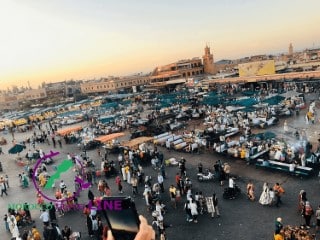